Since we’re well into fall, I thought it might be enlightening to reveal a few autumn-related items you might not know about me.

1) The Denver Broncos is my favorite football team. In Colorado, supporting the blue and orange is the way we roll. There have been a lot of lean seasons, but it’s looking good so far.

2) Right now I’m reading Gone Girl. I’ve been meaning to read it for a long time, but haven’t gotten it out of my to be read pile until the movie was set to come out. I decided I wanted to read the book before seeing the October premiere (I’m a fan of reading the book before the movie, if there is a book).

3) Brach’s Mellowcreme pumpkins are my favorite candy this time of year. Because these are only around for a limited time, I tend to indulge as long as they’re available.

4) I don’t care for seasonal drinks like the Pumpkin Spice Latte or hot chocolate or hot apple cider. Pretty much coffee year-round. Once in a while a latte, but mostly black coffee.

5) As of this fall, I’ve had six books out. My latest is Crash Pad, which is a summer story. Here’s the blurb. 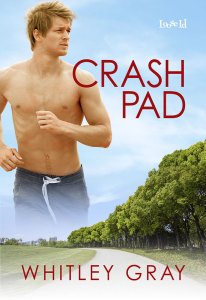 Physician Remy Marshall has two loves: Emergency Medicine and running. Work doesn’t leave much time to meet guys, and most seem more interested in his bank account than him. With a week off to train for a marathon, Remy plans to make the most of his precious vacation. The last thing he needs is a distraction.

Jamie Sutton is new to the area. He hopes to make a fresh start after leaving an abusive relationship with an orthopedic surgeon. He’s got a new job as a massage therapist and wants to meet some nice guys. Against his better judgment, Jamie decides the best way to meet a cute rollerblader he’s seen in the park is on wheels.

With attention on his watch and not where he’s going, Remy crashes into Jamie and fractures the first-time rollerblader’s ankle. Jamie has no one to help him after the injury; Remy proposes Jamie stay with him. Jamie is reluctant, but it’s a better option than staying with the odd guy in the neighboring motel room. As the two get acquainted, Jamie’s past comes calling. Remy discovers the prize he really wants isn’t a medal in a marathon, but the man right in front of him.