This week’s guest for Friday Five is Teresa Noelle Roberts. Thanks for visiting the blog, Teresa!

What kind of books do you read for fun?
I guess it’s cheating to say “the print kind, usually in English” so I’ll try to be more specific. I binge-read paranormal romances and urban fantasy—Jim Butcher and Ilona Andrews are favorite authors. Certain historical romances speak to me; I’m a huge Eloisa James fan, for example. In the right mood, I love history, especially cultural history. I cut my teeth on Tolkien and still adore epic fantasy. Never made it though the Song of Ice and Fire series, though; George RR Martin is an excellent writer but he described his dark, nasty world so vividly the books depressed me.

Oh, and I read cookbooks. I love to cook, but some of my favorite cookbooks to read have such complicated recipes or require such exotic ingredients I rarely cook from them. I enjoy them because they’re well written and full of stories about people told through the medium of food.

What’s the one thing you can’t live without?
I suppose my husband doesn’t count as a thing, and neither do my cats, so BOOKS. (I bet you get that answer a lot.)

If a genie granted you three wishes, what would they be?
36 hours in a day while not needing to sleep more than I do now.
A library-Tardis: it’s not very big on the outside but it’ll hold all the books I could ever want. I know a Kindle’s kind of the same thing, but I like print books too.
Knees that don’t ache.

I was going to say my dream kitchen, but that’s possible without a genie (though hard on a budget).

What is best writing advice you can give?
I can’t remember who originally said, “You can’t revise a blank page, but you can revise utter crap,” but that’s become my motto over the years. Just get a draft done. Then fix what you already know is wrong, share it with beta readers, listen to what they have to say and fix it some more. Lather, rinse and repeat a few times to make it the best finished product you can. But first you need the messy, partly horrid draft. 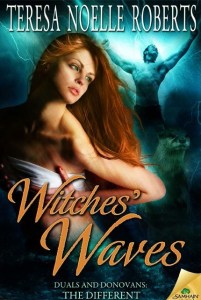 Witches’ Waves is the fourth numbered book in the Duals and Donovans: the Different series. (There are currently five books set in the Duals and Donovans world, but one has its own story arc.) These are red-hot paranormals, full of shapeshifters of all kinds (Duals), powerful witches who specialize in sex-magic (the Donovan extended family), and a shadowy government branch that wants to control all paranormal activity for its own ends. Witches’ Waves wraps up one major storyline in this world, but there are still plenty of sexy Donovans and their witchy relatives left for future adventures.

Here’s the book blurb, complete with the usual Samhain warning that’s more like a recommendation:
The ocean is on their side. But the fight is on land—and it’s about to get dirty.
Duals and Donovans: The Different, Book 4
Long held captive as the Agency’s secret weapon—a blind witch with visions—Meaghan has come to a line she refuses to cross. Rather than betray the infant “child of five bloods” to the Agency’s scientists, she chooses death. Except when she throws herself into the ocean, she doesn’t die. Her repressed water magic comes to life.
When the sodden, delirious witch drifts into Kyle’s arms, his otter dual instincts tell him to get her to the Donovans as fast as possible. Even though one particular surfer-dude Donovan broke his heart.
Declan Donovan continually kicks himself for pushing Kyle away, but his touchy combination of water, earth and lightning magic is too volatile, and Kyle wanted more than Deck was ready to give.
When they come together to help Meaghan control her new magic, it leads the Agency straight to the child of five bloods. They’ll have to dive head-first into total trust—in their magics, in themselves and in each other—to save the child and stop the Agency once and for all.

Warning: Contains an oceanful of sex between an ethereal blind heroine who swears like a pissed-off Marine, an overly serious otter shifter, a would-be beach bum who may be descended from a Norse god, in permutations as fluid as the sea – and themes of abuse and recovery.

And here’s the series blurb:
Welcome to an America where the non-human Different and magically gifted humans live among ordinary people. Witches are both feared and honored, but shape-shifting Duals are treated as second-class citizens. The Agency, a government agency that’s supposed to monitor illegal uses of magic and Different abilities, has developed its own dangerous agenda. But when Duals and witches join forces, the Agency and other bad guys aren’t going to know what hit them.
And neither are the witches and Duals. Witch magic grows from the positive energy of love and sex–and the only thing better than one Dual for sex magic is two of them!