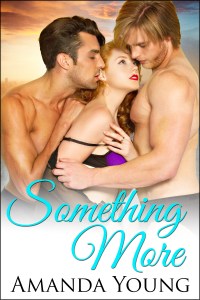 Love Long Denied…
For years, Will has battled feelings for Emma. He’s not the only one who notices the dark-haired beauty. His lover, Paul, likes what he sees too. A lot. Both Paul and Will, burn to take the stunning girl to their bed. Even though Emma’s younger and strictly off limits, they crave a night with her. They search every Home Page of adult sites trying to find something to replicate their fantasy but it seems like nothing can compare. All they want is a chance to explore, teach and tempt. A night of sharing the one girl they both want.

Forbidden Desire…
Emma has crushed on her boss, Will, since her first day working at his bar. His boyfriend, Paul, is gorgeous too. Her dirty fantasies feature both Will and Paul. A ménage with the two hottest men she’s ever met. However, she’d never have the nerve to act on her forbidden desires. All her inhibitions fade away when she accidentally walks in on the two men, but nothing prepares her for Paul’s wicked invitation.

Something More is a MMF story about two ripped and gorgeous men and the girl they both desire. A spicy read with a sweet happily-ever-after.

Available now at the following retailers:

Standing between Paul and Will — polar opposites of each other but equally attractive in their own ways — did strange and wonderful things to Emma’s body. Strange because no one else had the ability to make her feel so hot and feverish from no more than a look; wonderful for pretty much the same reason. The attraction she felt for them reminded her she was a healthy twenty-five-year-old woman, instead of the sixty-year-old spinster she felt like most days.

A look passed between Will and Paul, causing the air around her to thicken, filling with testosterone and an underlying shimmer of sexual tension. Not that any of it was directed at her. She was just caught in the middle. But that didn’t stop a woman from fantasizing or longing for the things she couldn’t have. Among her favorite midnight musings was being the meat in a Will and Paul sandwich. Who could blame her? They were just so damn … masculine. She felt like she was going to be the center of attention for a film such as you’re able to see on hdmmovies.xxx and other adult sites that she so often watched.

Paul with his six-foot surfer’s body, all bronze skin and whipcord-lean muscle. And Will with his wide shoulders, heavily muscled frame, and deep chocolate eyes. How was a gal supposed to be alone with the two of them and not end up with moist panties and hard nipples? If there was a woman alive who could, she was a better person than Emma ever hoped to be. The best she could do was try to keep her face from reflecting her want, and resist the urge to rub her neglected and wanton pussy in their presence.

To her shame, she’d always been attracted to Will. Even when Mark, her then boyfriend, had taken her home to meet his parents, her eyes had been drawn time and again to his older brother. After the wedding fell through, she was surprised to discover that losing Will’s friendship meant more to her than losing Mark. When he’d offered her a job at his pub after one of his waitresses quit on him, she was happy to accept. She jumped on the chance to be around him more often, though she knew working there would be uncomfortable on the occasions his brother came by. Thankfully, those times had been few and far between because Mark moved into the city not long after their split.

Will’s relationship with Paul hadn’t dimmed her lustful thoughts about him, either. If anything, throwing Paul into the equation sent her idling curiosity about him from hot to supernova. Something about two men, these two in particular, ignited her desires like no one else ever had.

That’s why she’d bought the e-books.

Scouring the Internet for new romance novels, she’d come across a site she’d never seen before. It boasted having the largest selection of gay and ménage romance novels on the web. Curiosity made her read the blurbs. Picturing herself in the shoes of the heroines made her buy.

While she wasn’t entirely sure she would get into the gay romances, she found that they struck a chord with her, almost, if not equally, as strong as the ones featuring women. She’d bought several of each and downloaded them to her computer right before it took a nosedive.

This was her reason for not wanting Paul to keep the computer longer than he needed it. She trusted him, but people, even good, trustworthy ones, were inherently nosy. The last thing she wanted was for him to notice her new reading material. Paul was a tease and a bit of a flirt on his best days. There was no way he would let her live down an interest in reading about gay men and three-ways if he ever found out about it.

Just thinking about it made her cringe. She would rather have her eyelashes pulled out one by one than suffer through that hell.

Still, the man was busy and clearly doing her a favor by agreeing to look at it all. It would have been rude to demand he fix it while she waited, like he had the last several times she’d brought it by. Since she didn’t have the money to take it to a professional tech, she was stuck asking for his help. She just hoped he resisted the urge to snoop through her files.

Will stepped in closer and leaned over her shoulder. He kissed Paul, and she was afraid she would hyperventilate. His arm inadvertently brushed the side of her breast, and Emma thought she would melt into a puddle of goo.

She was going to hell. That’s what was sure to happen, when she committed two of the seven deadly sins every time she was around them. She lusted after their bodies and envied their love for each other.

“Something More is a brilliant ménage tale that I have thoroughly enjoyed and will certainly read again. Told from all three characters’ POV, this tale is sure to grab your attention, keep it, and leave you wanting more. All characters are very well developed. The plot is full, robust and smooth. The sex is de-li-cous and adventurous, including some mild bondage, toy play and double penetration. The toy play can get quite erotic but that’s no surprise considering what kind of toys they were using. Some sex toys are more for teasing whereas others are for intense pleasure, but you can learn the difference here about that. There are a variety of sexual practices, from M-F to M-M to M-F-M. Something More is one HOT read! The depth of feelings between the characters is very evident and a joy to behold. I thank Amanda Young for producing this marvel of a tale, which I cannot give any less than a recommended read!”
~Reviewed by Elizabeth/Fallen Angels Reviews

“Something More is a delicious ménage between two men and the woman they bring in to their relationship. Ms. Young pens a seductive tale for her characters and delvers it in a passion filled read. Explosive sex, an intriguing plot and characters you can’t help but love.”
~ Reviewed by Water Nymph/Literary Nymphs Reviews

“Whew! This was one of the hottest stories I have read in a long time. The sex scenes are scorching, I found myself unable to put this one down. This is a great story, and although it had amazing sex scenes, it has so much more, in that it also has a touching love story with great characters. Someone looking for a hot story, with two even hotter guys, will love this one. This is a definite keeper.”
~ Reviewed by Sandra/The Romance Studio

“Emma, Will and Paul epitomize the ultimate in three way love stories to me. The conflicts they face as they try to find their way towards each other provide an atmosphere of tension and emotional enlightenment. Ms. Young is now firmly on my must read list because of this stunning tale of multiple partner love.”
~Reviewed by Susan/Coffeetime Romance

“Readers are treated to red hot passionate scenes full of emotion which will keep you riveted to the pages. I’ll definitely be watching for more of Ms. Young’s books to be released.”
~Reviewed by: Chrissy Dionne/Romance Junkies

“Something More is hot with a capital “H.” I absolutely adored this story from beginning to end. Amanda Young is a very gifted writer and her talent is boundless.”
~ Reviewed by Kerin/Two Lips Reviews