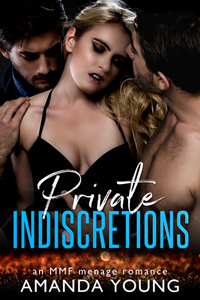 Jenna can’t believe her luck when she’s propositioned by not one but two hot men at her sister’s wedding. Despite being a confident, career-oriented, plus-sized woman, her love life has always been a disaster. So much so, that she’s moved beyond waiting for the right man and directly into family planning on her own. One last wild fling sounds like exactly what she needs before settling down to life as a single mother.

One passionate night with Jenna leaves Dylan and Tyler wanting more. They pursue the curvy brunette and are quick to take her up on her offer of a casual arrangement between the three of them. Emotions weren’t supposed to get involved, but there’s no denying what the heart wants. Both men desire more than Jenna’s willing to give and are determined to win her love. They’ll do whatever it takes to get their woman.

As Jenna’s secret becomes harder to hide, she begins to lament her decision to keep her relationship with the men casual. She’s fallen hard for them, but fears their reaction to the news of her impending motherhood. Before she can come clean, an unexpected threat puts more than their relationship at risk. Even if they all survive the danger, her deception might be a deal breaker.

Available now at the following retailers:

Dylan drained the last of his champagne and set the flute down on the table. “Who?”

“Her.” He motioned toward the voluptuous brunette in the hideously fluffy bridesmaid dress. “I think she was the maid of honor.”

“You noticed her too, huh? She was sitting with Jared’s brothers and sister, so I think she must be the bride’s sister.”

“Huh.” Tyler glanced back at the woman in question, and his mind spun with visions of the all wicked things he could do to her beautiful body once he’d stripped away the ugly dress.

Tyler’s imagination ground to a halt. “Dibs ass. I saw her first.”

“You didn’t even notice her until I said something.”

Dylan shrugged. “Go ahead and give it your best shot, pal. Women might find your ugly mug attractive, but we both know I’m more charming than you. I can talk her out of her panties a lot faster than you can stare her into submission.”

It wasn’t exactly a secret that he wasn’t a big talker, but that didn’t mean he was some damn Neanderthal who couldn’t hold a conversation. “You’re an asshole.”

“Maybe so, but I’m a charming asshole.”

“You’re really not that charming.”

Tyler shook his head. “No.”

Dylan grinned. “How about a compromise?”

Tyler suspected he knew where this conversation was headed and his dick approved. The groin of his slacks stretched uncomfortably tight across his growing erection. “What do you have in mind?”

“Winner shares her with the loser and cooks breakfast for all three of us in the morning.”

Dylan gazed out across the crowd toward the woman who’d caught both their attention. “Now comes the fun part.”

“Yeah.” He watched as she threw her head back, her long golden-brown hair cascading down her back, as she laughed at something the older woman beside her said. The sound rose above the crowd, loud and carefree, and made him smile. He wanted to get to know someone with a laugh that infectious. The fact that her dress made her rack look spectacular didn’t hurt, either. “I’m going in.”

Tyler rolled his eyes. Luck had nothing to do with it. He wasn’t one of those men who used cheesy pickup lines or gave false compliments. He approached women just like he would any stranger he wanted to meet—by being direct and open. Granted, he wasn’t going to walk right up to a woman and tell her he wanted to bang her like a screen door, but he definitely wanted anyone he approached to know he was interested and open to suggestions—preferably of the naked and sweaty variety.

He strode across the room with purpose and stopped just outside of the cluster of women gathered around his target. He zeroed in on the pretty brunette and thrust his hand out on front of her. “Hi. I’m Tyler.”

She glanced down at his hand as if surprised, then reached out and slid her hand into his. She met his gaze head on as they shook, her palm soft and small, cradled within his own. “Hi, Tyler. I’m Jenna.”

He liked the sound of his name on her lips. “It’s nice to meet you, Jenna.”

“Likewise,” she said. “So, Tyler, are you friends with the groom?”

“Ah.” She nodded. “I’m sure he appreciates you flying in to be here today.”

“I’m local, actually. I moved here for college and loved the area so much I stayed.”

“We have that in common then. Did you major in forestry management too?” he teased her.

The corners of her lips curled up. “No. I have a bachelor’s and doctor of pharmacy degree.”

“Well, it’s definitely my lucky day then. My mom always said she wanted one of us kids to marry a doctor.”

Jenna laughed, just as he’d hoped she would. “I’m not sure I’m exactly what she had in mind, but I think you’re getting a little ahead of yourself anyway.”

“You may be right. We should at least share a dance or two before we run away together.”

“All right. Show me what you’ve got.”

He led her onto the dance floor just as the music changed to something upbeat. They started to dance, staying separate but close, and communicated through looks and body language. The messages she sent him with every twist of her hips hinted at silk sheets and hot, sweaty nights, and made his blood heat with longing. The sensuous way Jenna moved her body sent his thoughts straight into x-rated territory. Every time she brushed up against him, he wanted to reach out and pull her closer so she could feel exactly what kind of effect she had on him. Only common decency kept him from acting on his desires. There would be a time and place for him to make his move, but it wasn’t on the dance floor while surrounded by friends and family.

Jenna seemed into him, but only time would tell if she was down for more than casual flirting. He just hoped she didn’t run for the hills once she found out Dylan wanted to join them. A lot of women were intrigued by the idea of being with two men, but whether or not Jenna would be one of them was anyone’s guess.

One song turned into two, and then three. As the third song slowed to an end, she leaned in close. “It’s so hot in here. You want to get a drink?”

“Yeah.” He followed her off the dance floor and across the room to the bar. “What’ll you have?” he asked as they sidled up to the bar.

“Just water would be great, thanks.”

He nodded and waved at the closest bartender. “Can I get a longneck, and a bottle of water for the lady, please?”

“Coming right up.” The bartender grabbed what he needed, cracked the lid off the beer, and slid both the bottles across the counter.

“Thanks.” Tyler paid and handed Jenna her drink.

“Thank you.” Jenna accepted the bottle and twisted off the top.

“You’re welcome.” He took a sip of his beer, while she guzzled down half the contents of the water bottle. “You weren’t kidding about being hot.”

She shrugged, confident and comfortable with herself. “The summer heat is bothering me more than usual. I’ve been about to melt all day.”

“I hear you. I work outside more often than not, and this year has definitely been a scorcher so far.”

“Did you say you’re a forest ranger?”

“Nothing quite so glamorous, I’m afraid. I do work for the forestry department, but my technical title is recreation technician, which is just a fancy way of saying I help maintain trails and campgrounds.”

“It can be at times. Summer’s always busy.” Warm weather brought an influx of hikers and fisherman from all around, which was great for tourism, but rough for those like him who tried to maintain order. In addition to the people crowding into the area, summer storms usually brought a nightmare of flooding damage and downed trees that needed removal. On the plus side, he got to spend his days outdoors and surrounded by nature, so he couldn’t complain. Even on his worst day, he wouldn’t dream of trading his job for some stuffy, nine-to-five office position.

“I’m not sure I could spend that much time out in this heat. I would melt.”

“I don’t mind it. If things get too hot, I just strip off and take a dip in the nearest body of water.”

A slow smile spread across her pretty face. “Skinny-dipping on the job, huh?”

“When the occasion calls for it.”

“You ever been caught doing that?”

“Nah. One of the perks of the job is knowing all the best private spots. There are a lot of beautiful areas the public never really has access to.”

Tyler liked where this was going. Just the thought of getting Jenna naked and wet made his groin tighten and his gut clench with longing. “I’d be happy to give you a tour any time you’re up for it.”