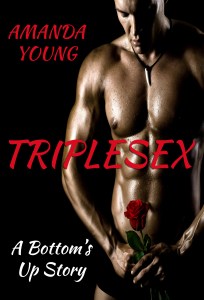 Book II in the Bottom’s Up Series

Caleb has worked hard to get where he’s at in life. Recently offered tenure at the college where he works, Caleb has let his personal life slide in favor of impressing the powers that be. Now that a much-needed summer vacation is finally at hand, Caleb fears his long hours may have been detrimental to his long-time partner’s happiness.

An appreciative eye for the male form is perfectly natural, but Zaki’s preoccupation with other men is cause for concern. Even though Caleb trusts his lover, he’s suspicious of Zaki’s motives. While Caleb isn’t above a little recreational sex by mutual consent, he wouldn’t be able to forgive Zaki for screwing around behind his back. His only hope is to turn back the tide of discontent before it’s too late.

Excerpt
…Caleb unlocked his office and pushed through the doorway, his mind racing with all the last-minute things he could do to make the night memorable. He wasn’t sure if they had the snickerdoodle-scented massage oil Zaki favored, but a quick stop on the way home would fix that. Maybe while he was out, he’d pick up a few DVDs for later inspiration.Sitting at his desk, Caleb noticed the message light flashing on the phone. Although tempted to ignore it in favor of hustling through his work, his sense of responsibility wouldn’t allow him to dismiss the message. Very few people outside the administration called him on his work line, so it was probably important. He just hoped the call didn’t involve someone trying to talk him into staying on staff over the summer.After punching in his access code, Caleb lifted the receiver to his ear. His lover’s voice echoed through the line. “Hello, love. I know you’re hard at work right now, but I need you to meet me at Henley’s pub after work. See you soon.”Confused, Caleb reached into his pocket for his cell phone, wondering why Zaki hadn’t used the mobile number to call him. A brief recollection of hooking up his phone to the charger the night before, and walking out without it that morning, stilled his hand. Sometimes he truly felt like he was getting senile.

Caleb replaced the receiver and wondered what Zaki was up to. He couldn’t remember the last time they’d gone to Henley’s during the week. Briar Henley, the owner, was a good friend of theirs, but he’d be busy working the bar. Zaki would be bored out of his mind in no time flat if he had to wait around to chat with Briar. Of course, there was always the chance Zaki wanted to kick off the summer with a few drinks. Zaki, however, wasn’t much of a drinker. He possessed almost no tolerance for alcohol. Two beers and he was buzzing…three and he was drunk.

If drinking was Zaki’s intention, Caleb hoped his lover would wait for him to arrive before he indulged. Lowered inhibitions, added to Zaki’s insatiable need to flirt, would lead to no good.

His thoughts shifted to the playful side of Zaki. The man had a way of turning even the slightest innuendo into something filthy and utterly delicious when he was playing the coquette. While this was one of the things Caleb loved about him, Zaki’s behavior sometimes made it hard for Caleb to tell when he was serious and when he was just screwing around.

Caleb wasn’t the jealous sort, and he trusted his lover, but Zaki had been acting a little strange lately…even for him. Almost secretive. For the last month or so, Zaki had gone out of his way to point out hot guys whenever they went out together. Not only would he mention other men, but also question Caleb’s opinion on each person and make lewd suggestions about what they could do to each of them. Not that a threesome was unknown in the relationship. They’d engaged in threesomes in the past. But it had been some time since they’d been so adventurous. Years, in fact.

As he turned his attention to the papers in his briefcase, Caleb hoped he would never have to make the kind of decision that came with a cheating partner. He didn’t want to contemplate what his life would be like without Zaki…

“I predict you will enjoy this story. It’s light and fun, and perfect for summer reading!”
~Carole/Rainbow Reviews

“Triplesex is another sexy addition in the Bottom’s Up series. In this episode, the creative Amanda Young kicks it up a notch with some extra spice. I look forward to the next enjoyable installment of this delightful series.”
~Chocolate Minx/Literary Nymphs Reviews