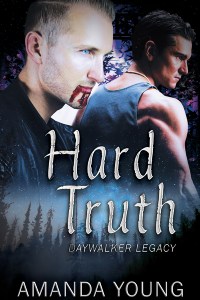 Red stepped inside and closed the door behind him. The plush blue carpet and beige silk decor melted away as his gaze zeroed in on the naked splendor of the only man he’d ever loved.

Cadge stood facing the window. The way he held himself — the inward turn of his broad shoulders and the downward-tilted angle of his proud chin — screamed of discontent. Silver moonlight illuminated his bare chest and shoulders in dim light. Shadows clung to his muscular back and long, athletic legs. The rounded curve of his buttocks and the shaded dip between groin and thigh teased Red with what he couldn’t make out — what he desperately wanted to see and touch. And taste.

Without any prompting, his feet carried him across the room and into the open doorway between the sitting room and bedroom. His body clamored for him to move closer, his balls tight from no more than a glimpse of Cadge’s nudity.

“I’m not complaining,” Red said, “but why are you naked?” It wasn’t every day he got to see the object of his fantasies come to life. Hell, he couldn’t remember the last time he’d seen Cadge in nothing but skin.

No, that isn’t exactly true. He could recall the last time, although he hadn’t been able to take the time to fully appreciate the view.

Close to a decade earlier, not long before Cadge had hooked up with Adrian, they’d had quick and dirty sex in an alley outside a pub in London to celebrate Red’s promotion to head regulator. They wouldn’t have been together then if they hadn’t both been drunk off their asses on blood laced with opium. The entire encounter had lasted less than twenty minutes, and they hadn’t even gotten completely naked. Thanks to a lack of lube, Red’s ass had burned and ached for hours, but he hadn’t regretted a single second of the encounter. Cadge never said a word about it afterward. Red wasn’t entirely sure he even remembered it.

Cadge shrugged. “I took a shower and didn’t have anything clean to put on.”
“I’m sorry, Cadge. I forgot all of your things are still in the SUV. I’ll have to get them out for you.”

“What difference does it make?” Cadge questioned, without turning away from the window. “Isn’t this what you want? Me, vulnerable and at your mercy?”

“What’s that supposed to mean?”

Red wasn’t sure how to take Cadge’s offhand comment, so he let it go. Cadge had always been a little flippant, even in the best of times, and he had to be stressed out after everything that had happened in the last week. Not to mention the little show downstairs.

Red’s arms itched to enfold Cadge and smooth away the other man’s worry. He wanted to hold Cadge close and promise him everything would be okay. Maybe if he meant it from the bottom of his heart and tried his hardest to convince Cadge, he’d be able to believe it himself.

“Do you want to talk about whatever’s eating you?” He stepped behind Cadge and wrapped his arms around him, placing his own forearms underneath the hard ridge of Cadge’s arms, where they crossed under his heart. “If you’re worried about the meeting, you shouldn’t be. The council is always a bit stuffy.”

“What is it, then?” Red inhaled the musky scent of Cadge’s skin, the slightly fruity scent of soap and shampoo, and fought like hell to resist the urge to bury his face in the shining waves of Cadge’s dark hair. An embrace was one thing; sniffing Cadge like a rutting dog was another. He couldn’t help the hard-on pressing against Cadge’s ass. It was a product easily explained away by lust. Red didn’t mind letting Cadge think he was hot for his body; he couldn’t stomach revealing the depths of his feelings. He could take having his sexual advances rebuffed. Having his heart stomped was another matter.

Cadge’s pulse picked up. Red could hear it beating hard and fast, the blood pumping through veins and arteries in a fast rush of sweet, succulent life. His gums tingled from the mere thought of being able to taste the other man’s essence bursting over his tongue.

Before he realized he was moving, Red’s mouth was pressed tight against the velvety skin of Cadge’s throat. Cadge’s pulse thundered against Red’s lips, egging him to take what he craved, to sink his teeth into Cadge’s flesh and drink. His glanced down over Cadge’s shoulder and watched the rise and fall of firm pectorals. The proof of Cadge’s desire jutted from his groin, stiff and heavily veined. The thick shaft bowed under its own exceptional girth, the swollen head ripe with juice that caught the dim light and glistened like manna from heaven. Red’s mouth watered against Cadge’s neck.

Cadge cleared his throat. “What do you think you’re doing?”

Red pinched his eyes closed. He brushed his lips over Cadge’s jugular in a gentle kiss, trying to make it seem as if that had been his intention all along, and lifted his head.

“Why?” Red loosened his grip on Cadge and ran his hand down the cobbled surface of the other man’s abs toward the hard staff between his legs. “You obviously like it.”

“Just because my cock gets hard for you doesn’t mean I want your hands on me.”

“I would say that’s exactly what it means.” Feeling brave, Red clasped the base of Cadge’s dick and gave it a squeeze. He’d come this far. He may as well do what he wanted. “Why don’t you quit playing hard to get and give us what we both want? It’s just sex.” He dropped his other hand and cupped the heavy weight of Cadge’s balls. “It doesn’t have to mean anything more than two friends helping each other out, and it’s not like we haven’t done it before.”

Cadge jerked his shoulders, breaking Red’s hold on him, and walked out of the room without a word. Red followed, his gaze drawn to the firm mounds of Cadge’s ass as they flexed with each step. What he wouldn’t give to bury himself balls deep between those succulent cheeks, to hear his name spill from Cadge’s lips in pleasure. Making love to Cadge, their panting, writhing bodies locked as one, was the closest thing to a homecoming he could imagine.

It was a damn shame Cadge didn’t feel the same way.

“The Hard Truth is a story full of simmering sensuality and an undeniable longing for love that explodes such passionate sex that it will scorch your fingers. Cadge is infuriating at times even if his passion is explosive enough to leave you envious of Red. Red, on the other hand, is the strong and somewhat silent type that has emotions running so deep that it will leave you speechless. As a rule, I am a fan of Amanda Young’s work as she is a fantastic erotic romance writer with well developed storylines and characters and in this case she does not disappoint…”
~Bella/Two Lips Reviews