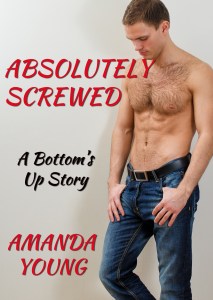 Book III in the Bottom’s Up Series

After being fired and abandoned by his lover following the appearance of racy pictures online, Max Finnegan is ready to move on and leave the bigoted small town where he grew up. With his bags packed and his truck loaded, only one thing remains to be done. Before he can go, Max needs to reach out to his deeply closeted lover one last time and try to convince him to come along. One way or the other, Max is determined to depart in the morning—with or without the love of his life.

Max rested his head on the steering wheel, reluctant to get out of the vehicle and go into his house. In hindsight, the high hopes he had for the evening now seemed desperate and pathetic. Why had he believed Doug would meet him at Henley’s and risk them being seen together when the man wouldn’t even pick up the phone?

Maybe, deep in his subconscious, he’d thought Doug would come running after the last voicemail message Max had left. It wasn’t as if Max had left many of them—his pride wouldn’t allow him to call more than a couple of times—but he’d felt Doug might want to know he was relocating. There certainly wasn’t any reason for him to stay in town now that he was unemployed.

Fortunately, he’d lucked into another position teaching world history at a public high school in Maryland. He wouldn’t be able to start his new job for three months, until the beginning of the next school year. The pay was considerably less, but it was better than nothing, and he had a couple of friends from college who lived in the area.

Reaching out to Doug was the last thing he needed to do. At the very least, Max had hoped to clear the air between them and say goodbye. Their relationship might not have ended under the best circumstances, but they’d shared a lot of good times in the years they’d been together. The thought of leaving without ever seeing Doug again hurt worse than the protracted silence he’d endured after being outed in one of the most dramatic ways possible short of being caught fucking on the school lawn.

Apparently even the merest shred of closure was outside of his grasp.

There’s no worse fool than an old fool.

At the moment, he felt every single one of his thirty five years, plus some. While he would have preferred to place blame on the alcohol for his churning stomach, the truth wasn’t so pretty. He simply couldn’t face another night of lying in bed alone, his fingers tracing the cold sheets on Doug’s side of the bed while he remembered better times and thought about the murky future awaiting him.

Although they’d never technically lived together, Doug had stayed over at Max’s house more often than not, always finding some excuse not to go home. Neither of them had given a second thought to Doug’s vehicle being parked outside the house on numerous occasions—not when the home Max had inherited from his grandparents was situated so far outside the town limits that his nearest neighbor was over two miles away.

Otherwise, they never would have risked spending the night together so habitually—or making love whenever and wherever the urge hit them. It wasn’t as if they had fucked like bunnies, but they’d certainly taken advantage of the rural location. Some of Max’s favorite memories involved him and Doug making love under the stars.

If only they’d been a little more circumspect, then Max would’ve still had a job and a lover. He wouldn’t be dragging home from a bar with the stench of liquor on his breath and the air of failure clinging to him like cheap cologne. He’d probably be curled up in Doug’s arms, satiated and sleeping the sleep of the well-fucked.

Instead, another restless night awaited him.

Finally, after his back began to ache from sitting bent forward so awkwardly, Max sat up and pulled his keys from the ignition. He climbed from the vehicle, stuck the jangling bundle of metal into his pocket, and slammed the door closed behind him. The loud clatter quieted the crickets for a fraction of a second, then they started up again, chirping louder than ever.

Max dragged his feet, making the loose gravel crunch under the soles of his sneakers. He skirted around one of the two large bushes flanking the porch and stopped dead in his tracks. Having forgotten to leave on the outside light, the man sitting on the cement steps was nothing more than shadow. Nevertheless, Max didn’t need to see in order to identify the visitor. All he had to do was inhale.

There was only one man he knew whose cologne smelled so spicy and yet sweet all at the same time.

Max crossed his arms over his chest and glared at the blackened silhouette. “What are you doing here, Doug?”