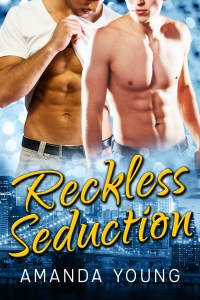 Book I & II in the Reckless Series.

When nineteen year old Cody Bradbury gets his hands on an invitation to the hottest party of the year, he doesn’t plan to let anything stand in his way of attending. With a stolen invitation, fake identification, and a hastily thrown together costume that looks like one of the incredibly sexy suits from Laidtex.co, he sneaks into the gay club owned by his uncle during the annual Halloween bash with the intention of checking out the action and possibly losing his long-despised cherry.

Cody can’t believe his good luck when Dante Santiago comes on to him. He’s had a hard-on for his uncle’s best friend and business partner for years. He’s so enamored of the older man that he doesn’t think twice when Dante wants to hook up. However, once he gets his hands on the man of his dreams, he begins to hope Dante might want more from him than just an orgasm and steamy session like they’re imagining or have viewed in the past on a website like https://www.hdsexvideo.xxx/ for example. He can think of only one way to find out and he plans to make it an experience neither of them will ever forget.

Luck was with Cody as he entered the club. There was a new guy on duty at the door who didn’t look twice at his fake ID or ask him to remove the black latex Zorro mask that stretched across his eyes and tied at the back of his head.With mixed emotions — excitement and trepidation both high on the list — Cody strode through a well-lit foyer and handed off the trench coat he’d worn over his outfit to a smokin’ hot coat-check clerk. The man sported a head full of ebony dreadlocks and wore nothing but a tiny tiger-print loincloth across his lean hips.

He whistled while he looked Cody up and down. “Very nice.”

“Thank you,” Cody said, preening a little as he accepted his coat ticket and walked on by.

He knew he looked good in the black latex bootie shorts and matching vest, but it was always nice to have it confirmed by someone else. He loved the shining silver zipper that ran down the front of his shorts, allowing him easy access to his package if he felt the need to get naughty in a hurry. The soft leather vest hugged his chest like a second layer of skin and was held closed by three silver snaps. The black patent leather boots he’d purchased that morning were a nice touch; the platform soles gave him two extra inches of height while the upper portion laced up the front and clung to his calves. The boots stopped just short of his knees and left plenty of skin on display. The overall effect left him feeling half-naked and loving it.

It seemed like all eyes were on him as he entered the main room. Men were packed into the club like sardines, walls of naked flesh as far as the eye could see. Pulsing techno music poured from invisible speakers, overwhelming Cody’s sense of hearing.

There was so much to look at that Cody didn’t know what to concentrate on first. People were all around him, a sea of face paint and leather. There were young men, old men, and every age in between strutting their wares for all to see. Some of the costumes were outlandish — yellow, feathered chicken outfits and one sad purple grape. Men dressed in drag, with sequined dresses and fancy wigs. Others were more intriguing, like the leather daddies and their boys. While there were some men decked out to the nines in tuxedos, others chose to bare as much skin as possible without being naked. One such man leered at Cody as he walked by, the dingy jockstrap obviously well worn.

As he stood gaping at the scenery, Cody spotted a man dressed as a dark angel at the back of the room. Revolving white light spilled from the DJ’s booth and backlit his heavy musculature and a wild plumage of ebony wings. A mask, much like Cody’s own, hid the upper half of the man’s face, making his aquiline nose and full lips more prominent. The black leather harness that crisscrossed his wide chest and leather pants left little to the imagination and sent Cody’s blood racing south.

Christ, that guy is hot.

He stared, his heart pounding. His dick, trapped at an uncomfortable angle, throbbed against the inner lining of his latex shorts.

Cody couldn’t wait to meet men and throw himself out into social scene. The club practically pulsed with life and vitality, and he wanted a little of that to rub off on him. Maybe he’d walk away with some new friends, or even a potential boyfriend or two.

He bounced, excited for the festivities to begin. Tonight was going to be the best night of his life. He just knew it.

Dante Santiago turned away from the DJ, having just reamed him a new asshole because the jerk was deviating from the approved play list, and found himself staring at an angel. Okay, so not really an angel per se, since the boy was dressed in shining black latex, but he was heavenly nonetheless. Just the kind of dirty little angel Dante preferred. He hadn’t dressed himself up as a fallen angel for nothing. He’d already warned Reno, his assistant manager, that the club was going to be turned over into his capable hands at the stroke of midnight. For once, Dante wasn’t going to cave in and let everyone else play while he watched from the sidelines. Tonight, he was going to get laid in spectacular fashion, and he was pretty damn sure he’d just spotted the perfect guy to take care of his needs.

Dante watched the younger man stop just inside the main room and glance around. He looked as well, trying to gauge what a newcomer would see when they first entered the club. The interior was dim; the flashing white lights lent a psychedelic quality to the atmosphere. Would someone so young see the black and white decorations he’d chosen as classic or outdated?

Dragging his gaze away from the décor, Dante returned his attention to the young man who now seemed to be staring in his direction. He didn’t know if the boy was actually looking at him or not, but he flexed his muscles just in case. He worked hard for every bit of definition on his six-feet frame, lifting weights every chance he got, and he was damn proud of them. It was hard to tell from across the room, but he thought he saw the boy lick his lips. Was he even looking at Dante?

Dante liked what he saw, from the top of the other man’s spiky blond hair all the way down to the thick-soled shit kickers and everything in between. Although the boy couldn’t have been more than five-five, he worked well with what he had. His muscles were toned and fit, without being bulky. His biceps and thighs were corded with lean sinew, the golden skin tone a sharp contrast with the dark, shiny material of his outfit. Judging from the guy’s looks and the way he moved with an innate, fluid grace, the boy either swam or ran to stay in shape.

The thought instantly brought to mind an image of what the boy would look like wet and with a mouth full of cock. Dante groaned and adjusted himself, trying to make a little extra room for his expanding cock.

Christ, he was getting desperate if some guy was making him moan from nothing more than a glance.

He needed to quit spending all his time working and relax more. It had been way too long since he’d let go and had a little fun instead of obsessing over every minor detail of The Casbah. It would have been easier to be employed by a stranger. Then he wouldn’t have the overwhelming drive to work himself into an early grave to make sure the club stayed hopping and his buddy remained the rich, pompous asshole he’d become in midlife.

Not that he meant that in a bad way, but Beaumont Bradbury certainly wasn’t the same man he’d known in college. Dante’s tastes had remained simple, while Beau ran more toward cognac and cigars rather than the beer and weed they’d favored in their younger days. Although they remained friends, they weren’t as close as they once were. They talked occasionally, more business related than personal, and they still got together every so often for a poker game, but that was about it. It was a shame they’d grown apart, but Dante figured it happened to the best of people. They’d grown up and moved on, leaving behind the trappings of their misspent youth.

Thinking about Beau brought Cody to mind. Cody was Beau’s nephew; a spoiled little shit who liked to strut around in front of Dante half-naked on the rare occasions when he visited for something other than poker. The kid was hot, but he was barely legal and way too green for Dante’s tastes. He had no interest in initiating a virgin in the ways of man-to-man sex.

Actually, now that he thought about it, the guy he was practically drooling over kind of reminded him of Beau’s bratty little nephew. They shared a similar build and coloring. There was only one very important difference: experience. An untried virgin would never come alone to The Casbah. It would be like dangling fresh meat in front of a crowd of starving tigers. And Dante was definitely hungry for a taste of the sweet meat he was looking at.

Unfortunately, before he could play, he needed to speak to Reno to make sure everything was under control. Then the night, and the man he was salivating over, would be his.

Buy it now at Loose Id

“I have said it before and will say it again – Ms. Young is brilliant. She has managed to condense a wealth of emotion and tension filled turmoil within the short pages that is RECKLESS SEDUCTION.”
~Reviewed by Jhayboy/Romance Junkies

“Amanda Young has done it again. Reckless Seduction is absolutely magnificent. The characters are real and interesting, while being hot and seductive. The heat that these characters produce is amazingly scorching. This is the kind of book that must be read in one sitting with a bucket of ice and plenty of towels.”
~Reviewed by Kimberley Spinney/Ecata

“Ms. Young has created a Halloween story that has heart and enough heat to please anyone.”
~Reviewed by Teresa/Rainbow Reviews