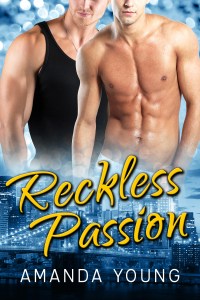 Book III in the Reckless series

Beau Bradbury has it all. He’s good looking, owns a lucrative business, and has an endless supply of hunks vying for his attention. His skinny, uptight personal assistant shouldn’t rate a bleep on his radar. Nevertheless, there’s just something about Adam that Beau can’t resist.

Beau Bradbury stared at his laptop, the last quarter’s earnings for Club Casbah slowly burning into his retinas. Glaring at them didn’t change the fact that memberships were on a downward swing. With the economy doing a nosedive, people just weren’t willing to splurge on expensive gentlemen’s clubs in order to get their rocks off. Something would have to be done if he wanted to stay in the black, but he wasn’t sure what. He certainly couldn’t raise the already exorbitant fees he was charging current members. That would only result in losing loyal customers who couldn’t afford the rate increase.

He refilled a highball glass with bourbon and swallowed the bitter brew, enjoying the heat that spread down his throat and crashed into his stomach. If there was ever a good time to get drunk, this certainly looked like the occasion.

Leaning back in his chair, Beau tried to think of some way to drum up business without losing his edge.

Casbah was known as an exclusive club, meaning he couldn’t promote a two-for-one deal without fucking up the club’s reputation. People didn’t pay good money for a club any Tom, Dick, or Harry could be admitted into at a moment’s notice.

After draining the glass, he topped it off yet again. A pleasant buzz built as he drank his fill. Thoughts of work circled around and around in an endless loop. With no easy solution in sight, his business woes slowly dissolved and were replaced by Beau’s favorite mental candy these days.

However, he had no intention of acting on his desire to fuck Adam’s pert little ass into next week. That didn’t mean he couldn’t think about it all he wanted, though. No one ever needed to know who he was fantasizing about on the rare occasions when he rubbed one out.

It wasn’t that he lacked for company so much as he was sick of the club scene. Taking care of his own needs was simpler than bringing someone home for the night, then having to kick them out the following morning. His taste in men invariably meant he chose the clingiest guy available, someone he’d have to pry out of his life with a crowbar, regardless of how quickly the other man had agreed to casual sex the night before.

Being a wealthy business owner had drawbacks as well as perks.

Those who weren’t swayed by his bank account would usually drop and spread ’em for his blond good looks or the body he religiously exercised. Single and in his thirties, Beau had no intention of letting an ounce of fat touch his short and stocky frame. If he weren’t careful, it would be too damn easy to go from solid to flabby.

Perish the thought. A fat ass wouldn’t catch the attention of anyone, regardless of how much I’m worth.

Beau closed his eyes. His mind flashed from one improper image to another. Adam taking advantage of Beau’s home gym, his pale skin glistening as he made use of the treadmill. Sweaty black curls clung to the sides of his heart-shaped face. Beau was half convinced the man’s tiny running shorts and nearly transparent tank tops were designed as punishment for horny, leering men of his ilk. Learning Adam dressed to the left, and had surprisingly large balls for a man his size, had been worth the torment.
Another image came of Adam decked out to the nines in a formfitting rented tux, his cheeks tinged with pink from all the compliments he’d received during the last party at the club. The coquettish looks and bashful blushing had only made Beau want to bend Adam over the nearest booth and fuck him all the more.

Beau palmed his cock through the slick fabric of his slacks. Christ, he ached. It’d been too long since he’d gotten laid. That was going to have to change. Soon.

A quiet knock sounded on the door, followed by Adam’s deep voice. “Boss?”

“It’s open.” Beau yanked his hand away from his dick and brushed his bangs out of his eyes. He hoped his face wasn’t as red as it felt.

Adam opened the door and then strode into the room carrying his laptop. His curls stuck up in spiky little ringlets, as if he’d been running his fingers through them. Dressed casually, Adam wore a pair of snug chinos and a faded black T-shirt. “Hey, I was just going through your calendar for this month, and it looks like you’re double booked for the thirtieth.”

Speak of the devil, and he appears. Beau blinked away his inner thoughts and stared at the man he’d been obsessing over for the last thirty-plus days. Already half-hard, his cock gave a tiny, happy jerk inside his pants. Why does Adam have to be so fucking adorable?

Beau coughed, trying to concentrate on what Adam was saying. Not an easy feat when his mind was busy translating everything into a subtle come-on. “Why don’t you switch the Adalgo appointment to the morning of the first and cancel my racquetball game with Mitch.”

There. I can do professional, even while half-baked.

A hint of wet pink tongue flashed over Adam’s lower lip as he stared down at his laptop. “That’ll work.”

Adam looked up, his deep brown eyes concerned. “Are you okay?”

“All right.” Adam closed his laptop. “Is there anything else you need from me tonight? It’s closing in on seven o’clock, and I’d like to call it a night.”

“No. I –” Beau’s gaze lowered to Adam’s mouth while the younger man licked his lips and made the plump, rosy flesh glisten.

Beau’s control snapped like a dry leaf. Fuck it. “There is something I need from you.”

Beau got up, his legs a little unsteady beneath him, and advanced toward Adam. “I need you to stop batting your lashes and undressing me with your eyes. If I see you lick your lips in my direction one more time, you’d better make damn sure you’re willing to back up the move with some action.”

“Don’t you?” Beau snatched the laptop out of Adam’s hands and set it on his desk. “I’ve seen the way you look at me when you don’t think I’m paying attention. You want me. I know you do. Even if you’re too chickenshit to admit it.”

Adam’s eyes widened, his chest rising and falling faster. “If that were true, and I’m not saying it is, I still wouldn’t act on it.”
“Why?” Logically, Beau knew all the reasons. They no longer mattered. Lust overruled common sense and fueled his need to claim Adam in the most basic, intimate way possible.

“I work for you. Isn’t that explanation enough?”

“No.” Beau caught Adam’s chin and tilted it up. Without giving Adam a chance to pull away, Beau swooped in and caught the younger man’s mouth with his own. Adam’s lips were firm yet soft, the lower one providing just enough cushion for the brute force behind Beau’s kiss.

Adam gasped and parted his lips, providing just enough space for Beau to take advantage. He slid his tongue into Adam’s mouth and explored, caressing and teasing as he got his first taste. Adam’s mouth was flavored with the French vanilla coffee he favored. A hint of a darker, infinitely richer tang lingered beneath, prompting Beau to keep kissing, to keep savoring, until he could figure out precisely what that unidentifiable zest was.

Meanwhile he palmed Adam’s cheek, the skin hot and prickly under his hand, and buried his fingers in the soft black curls he’d been dying to touch since the first time he’d laid eyes on the younger man.

Beau lost himself in the taste of Adam’s lips and the feel of the younger man pressing against him. Although Adam was an inch or so taller than Beau, his slighter build felt good in Beau’s arms. Right.

Beau’s pulse thundered in his ears, blood racing from one head to the other. He would’ve liked to go on kissing Adam forever, but his body had other, more pressing desires. All he needed was to hear Adam say he wanted this just as much Beau did, and then he’d give in to his desire to get the younger man naked. He yearned to press against Adam, skin to skin, and explore every inch of the sweet body he’d been fantasizing about for so long.

Panting, Beau tore his mouth away from the soft cushion of Adam’s lips. “Say it.”

Adam lifted his eyes and stared at Beau. “Huh?”

“Tell me you want me. I need to hear you say it before this goes any further.”

“Reckless Passion is a quick read that’s both hot and sweet. I enjoyed reading Beau and Adam’s somewhat rocky road to love. Fans of business/pleasure relationships will be sure to enjoy Reckless Passion, as I did.”
~Reviewed by Cassie/Joyfully Reviewed

“I would recommend Reckless Passion to those who, like me, have long awaited Beau’s story, but also to those readers who are looking for a hot, tender romance.”
~Reviewed by Jenre/Reviews by Jessewave