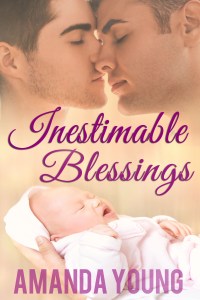 Lee Calder’s life is right on track. He has a small circle of close friends, a career he loves, and a baby on the way via a surrogate. Mr. Right is nowhere to be found, but Lee isn’t about to let that little tidbit rain on his parade. He’s more than willing to thrust his other needs aside and focus on fulfilling his lifelong dream of being a father.

With his love life in the gutter, Lee turns to fantasies of his hunky neighbor, Finn Alexander. His daydreaming is merely a harmless diversion until Finn comes to Lee’s rescue on a dark and stormy night.

To Lee’s surprise, the chemistry they shared in his imagination is nothing compared to the real thing. Finn is as hot between the sheets as Lee always envisioned. Better still, they get along famously outside the bedroom. The only things standing in the way of Lee having it all are the bundle of joy due any minute and Finn’s apparent aversion to children.

Lee hustled into Peckers Bar and Grill and cast a frantic glance around for his friends. Spotting them off to the left in the corner booth toward the back of the room, he waved and hurried over, conscious of the fact that he was once again late for their weekly powwow. He smiled as he slid into the booth beside Ted, opposite Jimmy and Sal. “Sorry I’m late. The snow made traffic hell between here and Asheville.”

“Excuses, excuses.” Jimmy picked up the pitcher of beer sitting in the middle of the table, filled another glass, and slid it across the table toward Lee. “At least you made it before the first pitcher disappeared this time.”

Lee caught the glass, making foam slosh over the rim and spill on his hand. He lifted it and brought the rim to his mouth, taking a small sip. “Thanks.”

“Things were fine.” Lee tried his best to tamp down his enthusiasm. One or the other of his friends was always giving him hell for hiring a surrogate, and he wasn’t in the mood to listen to any negativity, not when he’d just spent the day with Dawn.

Ted pushed his wire-rimmed glasses up the bridge of his narrow nose. “Just fine? That’s the best you can do?”

“All right.” Lee beamed at Ted. Thank goodness he had at least one buddy on his side. While he’d known Ted a shorter duration than Sal and Jimmy, both of whom he’d gone to college with, he and Ted shared a love of children. Whereas Lee had never given up on having kids of his own, Ted never dared to dream that high. Instead, he taught English at the local high school. “Well, since you asked and all, today was fabulous. I went to Dawn’s OB/GYN appointment and got to see the baby again. My little peanut has grown to about the size of a honeydew melon, if you can believe it. The doc says he or she is about four or five pounds now-which explains why Dawn’s belly is so huge. The whole day was just amazing. Really, really amazing.”

Sal groaned. “You just had to get him started on the procreation issue, didn’t you?”

“Yeah,” Jimmy added. “Now he’ll never shut up about vaginas and uteruses and fetuses, oh my!”

Ted snickered. “I don’t know, buddy. I think it’s great that you’re going through with having a kid of your own, but they kind of have you pegged.”

Lee rolled his eyes and took another long gulp from his glass before he bothered to respond. “I’m not that bad.”

“Dude,” Sal exclaimed, waving his hands, “last week you brought the week-by-week pregnancy book and tried to show us the diagrams. That shit is disgusting. If I wanted to know about the female reproductive system, then I would fuck women.”

“Come on, guys.” Lee looked as his friends and tried to will them to see things his way. “I admit I may go a little overboard sometimes, but this is a huge event for me. I’m going to be a dad. Can’t you be just a little happy and supportive?” God knew he had supported them through one drama after another, from helping them get rid of manipulative boyfriends to lending a hand to retrieve toys lost in orifices Lee could’ve gone his entire life without exploring.

“So am I,” Sal added. “I think it’s great that you want to spit in the eye of convention and do your own thing.”

Jimmy lifted his beer. “I support you too. I just don’t necessarily want to hear all the gory details.” He nodded, as if to cement his statement, then chugged back half a glass of beer.

“Hear, hear.” Sal clinked glasses with Jimmy. Then both men turned their glasses up and drained the contents.

Lee shook his head and smiled in amusement. Some things never changed. If he didn’t know better, he’d think they were still in their early twenties instead of verging on middle-aged. “Well, I’m starved. Who wants to split an order of hot wings and cheese fries?”

“That would work.” Ted waved over the server. “I could use something to help soak up the alcohol.”

Lee placed the order for what he wanted, remembering to ask for extra ranch dressing and the blue cheese Ted preferred. Sal and Jimmy ordered a second pitcher of light beer and a plate of nachos. While they waited for their appetizers to arrive, the men caught each other up on what was new in their lives.

Before the other men could get a word in edgewise, Jimmy launched into tale about how his latest trick left him.

“Can you believe Biff said that I was shallow? Me?” Jimmy’s narrow and overly waxed blond brows rose to a comical level.

Lee snorted. “Personally, I can’t believe you were sleeping with someone named Biff. Who would hate their kid enough to name them something so ridiculous?” In spite of himself, the sound of Jimmy’s nasal voice shrieking “Oh Biff, harder, Biff” popped into Lee’s mind and sent him into a round of totally inappropriate laughter that had all his friends staring at him like he was crazy.

He waved away their questioning looks. “It’s nothing. Sorry. I was just thinking about something that happened earlier.”

“Uh-huh.” Sal wadded up his drink napkin and threw it at Lee. “If you’ve been smokin’ the good stuff, the least you could’ve done is share with the rest of us.”

“As if.” Lee rolled his eyes. “I haven’t touched anything of the sort.”

“That’s probably what’s wrong with you,” Sal replied. “You need to loosen up a little.”

“Or get laid,” Jimmy added. “When was the last time you sat on a big fat one?”

Ted groaned. “Could you be any more crude?”

“Thank you,” Lee said. Some things just didn’t need to be discussed in public.

Jimmy leaned forward. “Are you going to answer my question?”

Sal laughed. “Please do. I want to hear this.”

“Fine. It’s been a while. Is that what you wanted to know?”

“Yes.” Jimmy nodded. “Just once I’d like to hear about you scoring some tail. I know you. You can’t be happy all by your lonesome, with nothing to keep your bed warm except your hand and fantasies about your hunky neighbor.”

“I have so much happening right now. I don’t need the added drama of a boyfriend.” He had a life plan, damn it, and he didn’t need a man to help him make all his dreams a reality. A lover would be nice-he wouldn’t lie about that-but he was satisfied on his own.

Jimmy chuckled. “Who said anything about a boyfriend?”

“I want to hear more about Mr. Hunky.” Sal rolled his beer glass between his palms. “Just how good-looking are we talking here? And more importantly, is he gay?”

“Spare me.” Lee shot Sal a dirty look. “The last time I checked, you’re the only one of us with a steady lover. Besides, there’s nothing to tell. He’s just some guy who moved into the house next door a few months ago.”

A spectacular lie was on the tip of Lee’s tongue when the server arrived with their order and saved him from answering. Rather than give him any more hell, his buddies discarded the conversation in favor of tucking into the grub. Lee was thankful. He didn’t need any more reminders of how much better his life would be if he had someone special to share it with.

“A sweet and engaging story…”
-Reviewed by Lily/Reviews by Jessewave

“Amanda Young’s Inestimable Blessings will have you laughing, cheering, crying—okay I cried, you may just sniffle here and there—and overall just celebrating love in many of its incarnations.”
-Reviewed by Kathy/Ebook Addict Reviews

“Ms. Young has created relatable characters, with real life problems. Inestimable Blessings is a poignant story that was a pleasure to read.”
-Reviewed by Seriously Reviewed