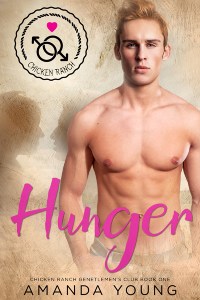 Book I in the Chicken Ranch Series

Disowned and cast out of his home, eighteen year old Declan Mayo turns to the only thing he can think of to help him get back on his feet. Working at Chicken Ranch, a rural brothel that caters to gay men, seems like the perfect solution. He isn’t about to let a lack of sexual experience stop him from taking what he sees as his only way off the streets.

Falling in love with one of his clients wasn’t in the game plan, but Declan can’t seem to help himself. Killian Hamilton is sweet and kind, with a stutter Declan can’t help but find adorable. Surely, if anyone could overlook Declan’s choice of employment, it would be a kindhearted man like Killian.

What Declan doesn’t count on is Killian’s connection to one of the brothel’s regular clients, or the way his love life is about to blow up in his face.

Available at the following retailers:

Without money for a cab or the gonads to hitchhike, what should have been a fifteen-minute drive to the countryside took Declan Mayo almost two hours by foot. A light mist of rain began long before he made it to the muddy driveway leading up to Chicken Ranch. His head and shoulders felt more damp than wet, but his sneakers squished with water thanks to all the puddles he’d stepped in along the way.

The sign above the entrance wasn’t huge or well lit, as he’d half expected from an establishment of ill repute. It looked much like any other discreet title carved into a wooden placard above the many ranches and farms in the area. No one would give it a second look, which he supposed was kind of the point. Keeping things low-key would be essential to any illicit business.

With a ragged sigh, he started up the darkened lane. Every step made the blisters on his heels burn like fire from where his shoes had rubbed his skin raw. As much as he would’ve liked to turn around and run in the opposite direction, he didn’t have many options. Pride didn’t make him any less homeless or fill the empty ache of a stomach that had gone too long without sustenance. Going back the way he’d come would only mean another long night on a hard park bench, worrying about whether he’d be accosted in his sleep or arrested for something he couldn’t help.

By the time he shuffled half a mile to the large colonial house, Declan was beginning to think the hustler who’d clued him in to the existence of a local, all-male brothel had been yanking his chain. Granted, prostitution was illegal in much of the country, but surely someone who operated a thriving, modern-day whorehouse would have the money to pave their driveway.

Dread crept up his spine and settled at the base of his skull as he climbed the steps and warily approached the front door. Although interior lights were on, assuring him he wouldn’t actually wake anyone up, he was a little afraid to knock. God only knew what he would discover once he did.Would someone answer the door with a shotgun and accuse him of trespassing on private property? Better yet, maybe this was all a setup, and he’d find himself kidnapped and sold into a ring of slavers looking for fresh meat.

His stomach gurgled, too empty to work up a full growl, and reminded him why he was there. Good or bad, there was only one way to find out what fate had in store for him. Declan steeled his courage and rang the doorbell.

Declan jumped and glanced around, only then noticing the small voice box located on the door frame. He pressed the Talk button and leaned in close, not sure how good the little box’s range was. “I, ah…” Fuck. What the hell am I supposed to say? “I’m here to inquire about a job.”

The door buzzed and swung open, revealing a young man with bouncy chestnut curls and big brown eyes that reminded Declan of the heifers on his old friend Brody’s farm. He wore a prim white dress shirt, buttoned up to the stiff collar, and pressed beige slacks — not exactly the kind of attire Declan thought of as a whore’s ensemble.

“You guess?” The brunet snorted and stepped aside. “Come on in. My name’s Colt. You’ll have to speak with Mr. Graves about a position, but he’s always on the lookout for new boys.”

Declan stepped inside and gawked, feeling out of his element. His family wasn’t poor, but being middle-class did not provide crystal chandeliers. Not that his family was providing him with much of anything other than scorn these days.

Directly in front of him were two impressive curved staircases that led to the second floor. A hallway disappeared behind each set of stairs. Spacious sitting rooms were located to his left and right. As he looked on, a buff, bare-chested guy dressed in black leather chaps, sans anything underneath, jogged down the stairs and disappeared into the sitting room on the left.

All the saliva in Declan’s mouth dried up. His gaze strayed to the doorway, hoping the practically naked man would appear over the threshold and let him take a long gander at the goodies he was sporting.

The door closed with a bang behind him, making him jump and jerk around. His face heated as the other man — Colt — shot him curious look.

“You don’t need to call me ‘sir.’ We’re all working stiffs around here.”

“Oh. Are you, um, are you a…?” Declan let his question trail off, unsure of what title he was supposed to give the prostitutes. They would undoubtedly take offense to being called whores.

“I’m not a rent boy, if that’s what you mean. I assist Mr. Graves. You know, you’re lucky it’s a Monday, otherwise the boss would be too busy to see you without an appointment.”

“Well, I, um, appreciate that.” Declan winced. He sounded like a complete moron. The owner — was there a male term for madam? — would probably take one look at him, think he was simpleminded, and send him packing.

“Mm hmm,” Colt said, turning his back on Declan. “Follow me, please.”

Declan trailed after the other man, down the hallway to the right of the stairs. Colt stopped at the first door and knocked lightly. A deep male voice called out for them to enter.

Colt opened the door and waved for Declan to go in ahead of him. “In you go.”

Declan stepped over the threshold, quickly taking in the tidy office before his gaze zeroed in on the man behind the desk.
“This guy –” Colt glanced at Declan, waiting.

It took Declan a second to figure out what the man wanted. “Oh. Um, my name’s Declan. Declan Mayo.”

“Right. Declan is here about a job.” Colt backed out of the room and closed the door. The tiny click of the latch catching sounded like a gunshot to Declan.

“Have a seat, Declan.” The raven-haired man behind the desk motioned toward the chair in front of Declan and then folded his arms across the impressive width of his chest. A charcoal gray sports coat pulled taut across the shoulders, while a white, scoop-neck shirt drew attention to the bronzed skin at his throat. The overhead light caught the slight traces of silver at the man’s temples and made the individual hairs shine like strands of the finest silk.

Declan sat on the edge of the seat, his back protesting. Used to slouching, the ramrod-straight posture felt unnatural. As unobtrusively as possible, he stared at the older man and waited for him to speak first.

“What kind of work are you looking for, son?”

“I, uh…” Why is this so hard? If I can’t say it aloud, I sure as hell won’t be able to actually do it. “I want to…” Declan inhaled and let everything out in one long rush of air. “Iwanttohavesexformoney.”

“The story touched my heart, proving just how quickly anyone’s living conditions could change. Amanda Young is a wonderful author and delivers messages about family, forgiveness, love, and personal growth to us in Chicken Ranch: Hunger. I could feel the struggle Declan had in making his decisions and could feel his fortitude to change his predicament into something positive. I thoroughly enjoyed reading this book.”
~Scandalous Minx/Literary Nymphs Reviews

“Chicken Ranch: Hunger is a very unique story that will touch the heart and bring the heat. The characters are engaging and sexy in their own way with a sizzle to their relationship that can’t be ignored. This is not your average love story and Chicken Ranch is not your average place. Amanda Young’s newest series is definitely full of surprises and second chances.”
~Kimberley Spinney/Ecata Sensual Romance

“In this story we learn that trust is something that bonds love eternal, that without it there is no guarantee of a true relationship. These two men make your heart sing, your soul cry, and your body crave fulfillment. Love is not a gender it’s an emotion, a blending of souls which is proven by this amazing author.”
~Ambrosia/Whipped Cream Reviews

“Amanda created two very likeable [sic] characters with unique names and personalities. The plot was solid, the narration perfect, and the dialogue very believable. The ending was sweet as hell. Whenever I am looking for something with meaning behind it, with a solid plot with a point to be made, you can bet I’ll be looking for another of Amanda’s books.”
~Michele/Michele N Jeff Reviews