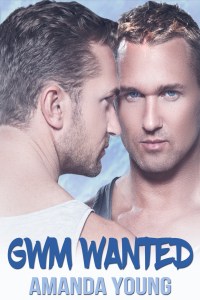 Finding true love is only half the battle. For some, they never find ‘the one’ and settle for vibrating sex dolls but for Mark and Sam, love and commitment came easily. Holding onto it, won’t be nearly as simple.

When Sam suddenly suggests they broaden their sexual horizons by inviting a third man into their bedroom, Mark reluctantly agrees, willing to do whatever it takes to hold onto his lover. He’s willing to share his husband’s body, so long as he retains his heart. He just wishes it was once as simple as being able to watch the article or something similar to keep them both aroused with each other.

Together, they answer an ad in an online advertisement. The other man seems to be just what they’re looking for – handsome, hung, and only interested in no strings attached fun just as they are. The perfect person to blend a childhood pasttime into something raunchy with. It isn’t until after the excitement begins that they find out they’ve made a terrible mistake.

Sam played devil’s advocate with himself all afternoon until he finally decided that Dev’s idea wasn’t such a terrible one. He wasn’t overly fond of the thought of sharing Mark with someone else but he would do it, if that’s what it took to satisfy his husband. He would do anything to make Mark happy.

After calling Dev to see which websites were the best to pick up men, Sam sat down at his computer and started typing. He browsed one site and then another, absorbing all the various ads from different people. The numerous ad details shocked him. He knew there were some strange kinks out there, but the manner of things people were willing to do in the name of pleasure was beyond his understanding. More than once, he found himself staring slack-jawed at the computer screen, baffled by one thing or another.

Before he realized what time it was, he heard the front door slam and Mark yell his name. Only then did he glance up from the monitor and notice how dark it was outside. The streetlamps were on, casting the only illumination to be found on a practically moonless night.

“I’m in here,” he called out to Mark and bookmarked another potential ad. He didn’t know how his husband was going to respond to his suggestion, but he’d saved the best of the lot to share with him just in case. He hated the thought of having to slough through all the creepy ones again. It was amazing how many people were looking for sex. Actually, now that he thought about it, most of them had been for sex. Maybe what they said about romance being dead was true, at least in the gay community. People had no qualms about requesting someone to suck their cock; it didn’t seem as if any of them were interested in an actual date or getting to know the person beforehand. Fortunately, that suited him just fine. He wasn’t interested in permanently sharing Mark with anyone — a one-time thing was going to be nerve-racking enough.

“No,” Sam said, glancing from Mark to the flat screen monitor currently filled with the image of a half-naked man reclining on a four-poster bed. “Well, sort of, I guess, but there’s something I’d like to discuss with you before I explain.”

“Okay. There’s something I’ve been meaning to talk to you about anyway.”

“Oh?” Sam turned in his seat and looked up at Mark. His heart seized at the severe look on Mark’s face. “What is it?”

“It’ll keep. You go ahead with whatever you wanted to say.”

“All right. Well, Dev and I were talking over lunch today. When I accidentally let it slip that our sex life had slacked off a little, he had a suggestion for how we could spice things up.”

Mark scowled. “Do you have to talk about our sex life with him? He may be your friend, but the man is an asshole. He hates me and would like nothing better than to see us split up.”

“Dev doesn’t hate you.” Sam tried not to roll his eyes and failed. “You just don’t know how to take him.”

“Whatever. So you were saying…?”

“Oh, yeah. Well, Dev said that a lot of other couples swing, to keep things exciting.”

“Uh huh.” Sam concentrated on Mark’s face and tried to read his lover’s expression. Since Mark’s thoughts were impossible to decipher, as usual, he forged on. “I thought the idea had some merit. After all, I can’t have you getting bored with me and running off with some little twink now, can I?” He smiled, trying to pass his words off as a joke, although what he’d said was actually one of his greatest fears — coming home to find a Dear John letter and his husband’s side of the closet empty.

Mark snorted. “As if you have to worry about that.”

“I don’t know. Stranger things have happened, I guess.” Sam couldn’t help but notice that Mark didn’t say no to his idea. Did that mean he wasn’t interested, or that he was waiting to admit interest until he was sure of Sam’s seriousness? “Playing with someone else could be fun,” Sam added with a shrug. “Or different, anyhow. What do you think?”

“Come closer so I can show you what I found while I was waiting for you to get home.” He turned back to the computer and pulled up a few of the personal ads he thought had potential. Mark stood behind him and rested his hand on Sam’s shoulder as he leaned in closer to get a better look at the monitor.

Sam studied Mark’s face as he looked through each of the three profiles and tried to gauge his response. All three of the men were handsome and in their low to mid thirties. Sam had decided early on that he didn’t want to involve anyone too young. He didn’t want any eager puppies hanging around after everything was said and done. Someone a little older was more apt to know what they wanted and be straightforward about it. The profiles he’d saved for Mark showed confident men with hard bodies, beguiling smiles, and an eagerness for casual sex. All three claimed a preference for multiple sexual partners, one of them even going so far as to say he preferred to join couples, rather than a single man.

When he didn’t get an immediate response from Mark, Sam faced the monitor and reexamined the pictures, wondering who Mark would choose. They were all attractive — otherwise he wouldn’t have saved the ads — but his favorite was probably the guy who called himself Dick. His ad began with a simple title: GWM Wanted.

The profile was short and direct, citing a desire to meet one or more men for no strings fun in the bedroom. His only requirements for prospective sexual partners were that they be height/weight proportionate and between the ages of twenty-five and fifty. There was also a line about not being players, or something like that, but Sam skimmed over it, not really considering it very important since he was going to be very careful to include what they were and were not interested in, if and when he replied.

While Sam concentrated on trying to figure out why this man appealed to him, Mark massaged his shoulders, using a firm grip to loosen his tense muscles. He closed his eyes and leaned his head back against Mark’s abs. “Feels good.”

“It’s supposed to,” Mark said, running his thumbs up the nape of Sam’s neck and into his hairline.

Sam shivered, the hair on his arms standing up as Mark’s magic touch wiped away everything else. He wanted a break from the stress and worry that had been plaguing him and to just…be.

At no time did that seem easier than when Mark’s hands were on him, touching him and driving him to the brink of madness. Making love with Mark didn’t require any guesswork or uncertainties. In the past, it had always just come naturally to them, which was why he’d been so bewildered at how things had changed. God, he couldn’t even remember the last time Mark had done him, instead of the other way around. He missed being able to hand over the reins and know his desires would be taken care of.

The spontaneity and combustible fervor they’d once shared was reduced to bare embers of its former glory. Most of the time it seemed to take an act of Congress to instigate any kind of intimacy, and Sam had all but stopped trying.

Mark wasn’t a big talker — he clammed up when it came to discussing his emotions — but he’d always been good about showing it in other ways: touching Sam, kissing him, giving him back rubs, as he was doing now. Those affectionate gestures had slowly drifted away, making Sam feel bewildered and lost. He needed those reminders of Mark’s love, since his husband had never been one to say the words.

The smell of Mark’s cologne — crisp and woodsy — imbued Sam’s senses as his lover pressed against him from behind and ran his hands down Sam’s chest. Mark caressed Sam’s pecs and upper abs, rubbing with just enough pressure through the thin T-shirt to make Sam yearn for more.

He arched his back and pushed up into the touch like a cat eager to be petted. “God, Mark.”

“I know. Don’t stop.” Not when it felt so good to be touched, like he’d gone forever without the contact.

Mark leaned over him, his breath hot against the side of Sam’s face. “I won’t. Whatever you want, love, it’s yours.”

“You. Always you. Just don’t stop touching me.” Loving me, he silently added, turning his face to the side.

Joyfully Recommended!
“Fantastic and so beautifully written, GWM Wanted is a must read. Amanda Young captured perfectly the insecurities and fears found within a marriage when the couple stops communicating. Gay or straight, all relationships hit roadblocks when partners don’t express their feelings and say what they need, want, and feel. Sam and Mark are a couple in love and still very attracted to each other, but because of lack of communications and letting fears take over, they were losing each other. Going to the extreme of inviting a third person into their sex life may not have been the answer, but in a roundabout way, it was the eye-opener they needed. Ms. Young did a great job with this and she also made a good point about the risks of answering online ads. I loved GWM Wanted and I Joyfully Recommend it.”
~Reviewed by Ley/Joyfully Reviewed