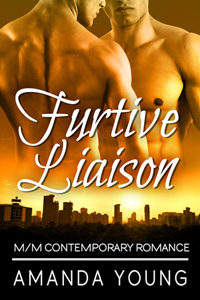 A little fun was all Shawn wanted when he met Marc at an adult bookstore. The instant, explosive chemistry he shared with the stranger took him by surprise.

Love was something he avoided until Marc strolled into his life and turned it upside down in the best way possible. For the first time in his life, Shawn isn’t concentrating on work.

The discovery of a child’s toy in Marc’s luggage sends Shawn on a downward spiral of confusion and heartbreak. Has their entire relationship been nothing more than the illusion of happiness, or could there be more to Marc’s betrayal than meets the eye?

The last place Shawn Delaney planned to be on a Friday night was sitting in his car, parked against the curb of a quiet suburban street several hours outside Manhattan. Acid churned in his gut as he watched his lover for the past six months twirl a dark-headed little boy around and around in circles.

If he didn’t know better, he wouldn’t have suspected the man in front of him was his lover at all. The kohl eyeliner and skin-tight denim he favored were gone, replaced with loose khakis and a plain white polo shirt that hung on his slender frame. The dark locks he normally spiked with gel were tamed down and slicked back away from his high forehead in a preppy style Shawn never thought he’d see on his young lover. It was like looking at a polished doppelganger of the man he loved.

The child’s exuberant squeals of joy carried on the light breeze and infiltrated Shawn’s car through the closed windows, twisting the metaphorical knife a little deeper into his chest. In true masochistic fashion, he couldn’t stop gazing at the Norman Rockwell scene playing out in front of him.

Shawn didn’t know how he’d gotten there, a spurned lover sitting outside his boyfriend’s house without a clue as to what he planned to do now that he was faced with the concrete proof of his lover’s betrayal. This lovelorn, angry and needy man was not who he wanted to be.

The man he’d always prided himself on being didn’t allow vulnerability for something as uncertain as commitment. He’d steered clear of attachments because he suspected this was the kind of shit he’d end up with for all his trouble. Some people inspired love and fidelity, but he clearly wasn’t one of them. He should have fucked Marc and left it that. Like a fool, he’d fallen in love.

And now he was paying for it.

In an ironic twist of fate, he’d been the catalyst for his own heartache. It was he who had dug and dug for dirt, convinced his lover was hiding something from him. His mother’s admonitions from his childhood rang in his ears, taunting him with the knowledge that he’d brought this on himself.

Be careful for what you ask for…

“As with any good romance story Furtive Liaison had a great outcome, but getting there took a lot of love and understanding. I enjoyed Furtive Liaison and I’m certain many other readers will love it just as much as I did.”
~Reviewed by Ley/Joyfully Reviewed

“Amanda Young does it again with yet another emotionally heartbreaking romance that will tear your heart in two, and set your computer on fire.”
Theresa/Ebook Addict

“Amanda Young can tell a well-rounded story, one that will leave you wanting more even after it’s over.”
April/The Romance Studio