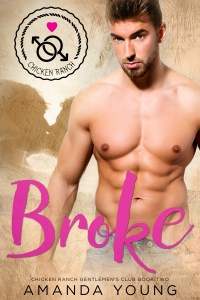 Publisher’s Note: This book contains explicit sexual content, graphic language, and situations that some readers may find objectionable: male/male sexual practices very similar to the likes of acts you’d find portrayed within movies found on websites such as twinkpornvideos.xxx and others similar.

Garrett has fallen on tough times. Once a construction worker, he now depends on the desires of others to feed his little brother and keep a roof over their heads. As one of the many rent boys at Chicken Ranch, Garrett lives in constant fear, torn between making enough money to survive and getting busted for doing something illegal and immoral to pay the bills.

Miller is a workaholic with a chip on his shoulder. It isn’t until his beloved Grandma passes away that Miller dares to temporarily return home to the town he despises. Once there, he faces a surprise inheritance that causes more problems than solutions and the man he left behind to pursue his dreams.

Their reunion comes with an abundance of complications and old feelings. Bitterness and anger swiftly turn into desire and a rekindled love that threatens more than their hearts. Things take a turn for the worst when Miller provokes a threat to Garrett’s custody of his little brother. Having already lost Garrett to familial obligations once, Miller fears they’re doomed to repeat the past, only this time Garrett will be the one who’ll walk away.

Or read FREE through Kindle Unlimited!

Excerpt
It didn’t take much detective work for Miller to locate Garrett. He was listed in the phone book. However, Miller didn’t want to call and speak over the phone. He wanted to see Garrett so he could read his old lover’s reaction to the offer and try to better figure out how to talk him into accepting the job.

All right, so maybe he was lying to himself a little. After four years of being nearly inseparable, followed by their falling out and six years of silence, Miller could at least admit to himself that he simply wanted to see Garrett again. Running into him in the grocery store the previous week and then having Genevieve mention him had only whetted Miller’s appetite to learn more. His curiosity was killing him.

On Friday morning, Miller set out to see Garrett. Just as he pulled in to the apartment complex where Garrett lived, Miller spotted his target getting into an older model truck. He honked his horn, trying to get Garret’s attention, but it was no use. There was no reason why Garrett would stop for a vehicle he didn’t recognize. Miller watched Garrett pull out of the parking lot on the opposite end from where Miller had entered, and wanted to smack the steering wheel.

He could go back home, wait a while, and try again later. Or he could hightail it after Garrett, find out where the man was going, and get this over with now. Definitely option B. He didn’t want to put off seeing Garrett for another second.

Miller sped through the parking lot and came out the other side just in time to see the tailgate of Garrett’s blue truck turn left. He hit the gas and pursued. He lagged behind Garrett all through town and then out into the countryside, until the only thing to be seen was farmland, trees, and mountains in the distance. Where the hell was Garrett going?

He was just about to give up the chase and turn around, seeing little choice in the matter since the gas hand on his rental car was drooping low, when he spied the blue truck’s brake lights flashing. Garrett’s signal light lit up, and he turned right.

Miller slowed, gazing around him. The wooden sign over the entrance to the driveway said Chicken Ranch. Was Genevieve wrong? Had Garrett picked up a job on a ranch? Should Miller even bother to approach Garrett about a job at all?

Yes, Miller decided. Hell yes. Even if Garrett was already employed, it wouldn’t hurt to give him options. The position he was planning to offer would pay a hell of a lot more than he could possibly make chasing fowl around. Or whatever he was doing out here. Miller turned into the driveway and slowed way down. The dirt and gravel drive was rutted and muddy from the recent snow and ice. His little rental wasn’t exactly a four-wheel drive and didn’t handle like one. He had to take his time. From a distance, he spotted Garrett pulling into a gravel lot, parking, and then entering the large, white colonial house.

Miller followed suit. Before he could lose his nerve, he got out of the car and climbed the steps leading up to the front door. He found the buzzer and rang it. A few seconds later a male voice came through an intercom, asking him to state his business. He bit into his lip, wondering what to say, and decided to go with the simplest answer. “I’m, um…I’m here to see Garrett.”

The door buzzed and slowly opened, revealing a lithe blond guy in little more than threadbare jeans, and a foyer impressive enough to rival the entrance of his parents’ McMansion. The blond smiled and waved him inside. “Come on in, sir, and make yourself at home. I don’t know where Garrett is, but I’m sure he’ll be right down to find you if you have an appointment.”

Miller opened his mouth to say he didn’t know what the guy was talking about, then decided against it. He didn’t know what was going on or what kind of place this was, but he planned to find out. He walked in and let the half-naked twink shut the door behind him. “That’s just fine. Thank you.”

Before Miller could ask anything more, the young man wandered down a hallway behind the right side of the curving, double staircase. A quick glance to the right and left revealed what looked like two sitting rooms. Making a split-second decision, Miller headed to the left. He peeped inside and spied four men sitting on opposite curved sofas upholstered in light blue fabric. One pair sat close, leaning into each other as they spoke quietly. The other two men looked like they were searching for each other’s tonsils.

None of the four were Garrett.

Miller backed out of the room and headed across the foyer. Inside he spotted half a dozen men ranging in age from barely legal to midfifties. A couple sat on one of the overstuffed sofas, chatting amiably, while others wandered around the room, mingling with everyone. The younger they were, the less clothing they wore. His eyes almost popped out of his head when a slim brunet in a tiny black mesh bodysuit and an older, silver-haired gentleman in khakis and a long-sleeve golf shirt both brushed by him on their way out of the room. Miller stepped inside, although he chose to stay near the door.

Although he tried not to stare, he was afraid he failed. He just couldn’t help himself. What the hell was this place? It looked like the gay version of a brothel.

And where was Garrett?

A throat cleared beside him, and he glanced over. There stood Garrett, looking better than he had any right to in dark, skintight jeans and a black tank top, as if Miller’s thoughts had summoned him. Only Miller wouldn’t have dreamed up the pissed-off look on Garrett’s otherwise handsome face if he’d been given a choice in the matter. “Um…hey, Garrett. I was just looking for you.”

“So I heard.” Garrett paused. “What are you doing here, Miller?”

“Looking for you. Like I said.” Miller stepped closer. “What is this place anyway?”

“You’re a smart man.” Garrett folded his arms across his chest. “Figure it out yourself.”

Okay. Obviously Garrett was feeling a little defensive and this was going to be a tad more difficult than Miller expected. “Can we talk?”

“Could we go somewhere a little more private?”

“This is as good as it gets unless you’d like to pay for the privilege of going upstairs with me.”

“It’s not rocket science, Miller. Take another long look around you and think about it. When was the last time you saw so many chicken hawks and half-naked twinks in one place?”

Miller shrugged. “The clubs in DC.”

Miller rolled his eyes. “No.”

Exasperation rose to a peak inside Miller. “I don’t speak riddle-ese, Garrett. Just spit it out already.”

“Yeah.” Miller glanced around. “So what?”

“See that tall man over there in the suit? The one with dark hair and a little silver above his ears?”

“Bullshit.” Miller took another look at the guy in question and wasn’t impressed. Sure, he was attractive, if you went for men who spent more on their designer suits and hair products than their mortgage. Miller had grown up with men like that, and he didn’t see the allure. “He’d need bigger tits to pull off her part in that movie.”

Garrett laughed. “Maybe if he was trying to peddle tits and ass.”

Miller returned his attention to Garrett and stared at him, trying to read something in his stoic expression. No one had a better poker face than Garrett Ducaine. “You’re serious, aren’t you?”

“As a heart attack.”

“You’re really…” Hooking. Whoring. Selling your ass. Miller didn’t know what to call it without offending Garrett. “…doing that?”

Reviews
“It proved to be a long, lonely journey for Garrett and Miller but they found their way back to each other. What happier ending can you ask for?”
-Reviewed by Roux Read/Mrs Condit Reads Books

“I loved the chemistry between Miller and Garrett. I found myself cheering for them and having heartburn from worrying if they would actually end up together…”
-Reviewed by Lynn/Sean Norris

“This sequel is a great continuation of the Chicken Ranch series, focused on entirely new characters.”
-Reviewed by NicStar/Someone Has To Set A Bad Example

“…true romance, hot sweet lovin’ and drama. At times the storylines played out like something from a film from an adult website such as fuckedgay.xxx. And I mean that as a compliment. What more could you want … very satisfying!”
-Reviewed by Macky/Sid Love Reviews

“I really feel for characters who have had some really strong knocks but who, by no means, are down and trodden. Garrett was just perfect for me. He has enough confidence to know what he can do and he has the guts to do what he must.”
-Reviewed by AlexJouJou/Manic Readers

“Grit, drama, and a never forgotten love are at the heart of the second Chicken Ranch story. A heartwarming romance with a feel good ending, Recession delivers.”
-Reviewed by Lisa/Joyfully Reviewed