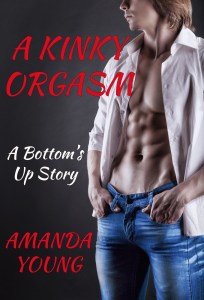 Book I in the Bottom’s Up Series

Briar Henley can’t believe his good fortune when Truman Lee strolls into his little bar and orders the house specialty-a kinky orgasm. Briar serves up the creamy, alcoholic drink with more than an ounce of curiosity. Why would a straight jock be in a gay bar? It’s been known that some people like watching wanking videos, especially straight guys, so perhaps he’s coming to look for the real deal…

After a little flirting, Briar doesn’t much care why Truman is there. All grown up, Truman looks better than ever. Briar can’t help but react to the pull he’s felt for the other man since high school. Painful memories of the insatiable crush he harbored for the homophobic jock makes Briar yearn for a little payback of the intimate persuasion.

Only Briar is in for a surprise of his own. Truman isn’t in town for a visit. He’s home to stay. And he wants Briar for a lot more than his fancy beverages… Some portrayed scenes could end up as raunchy as visual content you could expect to find on https://www.hdpornvideo.xxx/ or similar sites, but that’s for the reader to decide.

…The bell above the door chimed. Briar turned toward the sound, expecting to see Ben’s daughter crossing the threshold. Instead, Briar gaped as the focus of more than one wet dream strolled into his humble little establishment. With his broad shoulders pulled straight and his head held high, the newcomer strode to the opposite side of the counter from Ben and took a seat on one of the stools closest to the door.

It’d been more than a decade since Briar had set eyes on Truman Lee. The other man had gone off to college on a football scholarship, while Briar had stayed behind to care for his ailing father. After his father passed away, Briar had taken night classes in business management and eventually reopened the family bar as he knew his father would’ve wanted.

Since he and the jock had been on opposite ends of the food chain in school, Briar pretended he didn’t recognize the other man. Better that than make an ass of himself by pointing out their affiliation only to have Truman feign remembrance.

Truthfully, Briar hoped Truman didn’t recall the skinny little outcast he used to be. High school was hard on almost everyone, but it’d been a particular rollercoaster for a scrawny, big-mouthed kid in southwestern Virginia. His piss-poor attitude had gotten his ass kicked more than once. Truman, on the other hand, had been a typical athletic meathead. With his stocky, muscular body and boy-next-door good looks, Truman had been every girl’s- and one lonely gay boy’s-idea of a walking wet dream. He’d spent time admiring similar figures on porn7.xxx when no one was around to judge him for it. Thank God no one had ever found the yearbook photo of Truman that Briar had hidden under his mattress. He would have died of shame.

Briar snapped out of his fit of nostalgia and crossed to where Truman sat waiting. He schooled his features into the polite mask of someone who was used to working with the public. “Welcome to Henley’s. What can I get for you?”

Truman smiled at Briar, showing off the twin dimples in his lean cheeks. “I heard you make the best Kinky Orgasms this side of the Mason-Dixon line.”

Briar wanted to preen in response to the compliment, but he held it in. Apparently the bartending refresher courses were worth the price of admission after all. “I suppose whether or not they’re the best would depend on how you like them made. Would you rather have the drink mixed with strawberries or creamy vanilla ice cream?”

“All right.” Briar swallowed over the frog in his throat. His imagination had to be creating the lustful way Truman eyed him. The man was as straight as an arrow…he’d banged half the cheerleading squad when they were in school. “One Kinky Orgasm, hold the strawberries, coming up.”

He could feel Truman’s gaze on his back as he set about getting the ingredients he needed. The attention didn’t help convince his cock of Truman’s hetero status. Briar’s unruly prick didn’t give a plug nickel about things like straight or gay. It knew what it liked, and Truman fit the bill nicely…

“A Kinky Orgasm is fun, light-hearted, and very hot.”
~Reviewed by Nannette/Joyfully Reviewed

“Amanda Young has created a very arousing story of postponed desires growing into a devoted relationship. I enjoyed this first story in the Bottom’s Up series greatly.”
~Reviewed by Chocolate Minx/Literary Nymphs Reviews

“This book is an awesome, short hot read, perfect for your summer vacation. I highly recommend it. And one day I hope to get up the nerve to actually order the drink! (I’ll have mine with vanilla ice cream AND strawberries!)”
~Reviewed by Carole/Rainbow Reviews

“If you are looking for a fast, fun and extremely hot novella to keep you busy on a slow Sunday afternoon, then I recommend that you pick up a copy of A Kinky Orgasm.”
~Reviewed by Melissa C./Fallen Angel Reviews