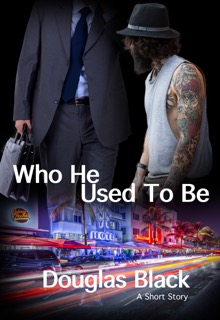 Who He Used To Be

Sometimes it takes a stranger to remind you who you used to be.

When Jeff, the man Connor moved across an ocean to spend the rest of his life with, announces their relationship is no longer working, Connor is caught unawares. Without Jeff, Connor has no reason to stay in Florida, but he doesn’t want to return to Scotland.

An impromptu visit to a nightclub leads to Connor meeting Parker, a man nothing like clean-cut Jeff and a lot more like the bad-boys Connor used to go for back in Glasgow’s biker bars.

A one-night-stand becomes something more, but the two barely have any time together before Connor is hit by another bolt from the blue.

Jeff decides he wants Connor back, and his offer to start over means Connor has to make a decision. Return to the security of his relationship with Jeff, or jump in at the deep end with Parker and find out if he still remembers how to swim.

“You don’t look like you belong here.” The man’s voice was deep, and he spoke slowly, almost lazily. Connor liked that.

The man nodded and gestured to the bartender. A few moments later, another bottle of beer was placed in front of Connor along with a glass of coke. Judging by the easy smile on the man’s lips and his complete disregard for personal space, Connor was willing to bet the coke wasn’t virgin.

“And you thought instead of going home, you’d come here. Somewhere that’s not your usual hangout. Somewhere you’re unlikely to be caught…by your boyfriend?”

Connor laughed and picked up his drink. “Partly,” he said, holding the bottle close to his lips. “Except for the boyfriend part.”

The man nodded and let go of Connor’s shoulder. He took a long swig of his drink.

“Is that why you’re here? This doesn’t exactly look like your scene either.”

The man smirked. He bit his bottom lip. “I’m babysitting,” he said, nodding at the bottle-blond guy Connor had been staring at before.

“Cousin. He’s just moved here. I thought he might need a little supervision.”

The man shrugged. “I’m Parker, by the way. I caught you checking him out. You didn’t look very impressed.”

Connor took another swig from his bottle of beer before moving a step closer to Parker. In those baggy jeans it was hard to tell, and Connor wanted to know if Parker was really interested. Connor made a move he hadn’t used in years and rubbed up against Parker’s groin, concealing his real intentions by whispering in Parker’s ear.

“He’s not my type. I prefer my men a little rough around the edges.”

Connor felt a rush of heat on his neck as Parker let out a breath that was too heavy to signify anything other than arousal.

Parker drained the contents of his glass before looking at Connor again. He stepped to the side, moving away from Connor, teasing as he pulled his lip between white teeth. Connor waited and Parker reached for him. He locked his fingers in the long hair tied in a ponytail at the nape of Connor’s neck. He pulled Connor towards him, making Connor close the distance between them again. Connor didn’t resist.

The first press of Parker’s lips against his own seemed to amplify the alcohol in Connor’s system. The banging base of the music melted to a thudding beat that dictated how Connor’s hips thrust against Parker’s, how their hands wound and pulled in each other’s hair. When Parker’s lips parted, Connor dived inside, wanting to lick away the taste of cheap bourbon to get right down to the taste of the man himself.

Parker’s hands left Connor’s hair and landed back on Connor’s hips. He moved Connor, rubbing their erections together until kissing was becoming damn near impossible. Connor kept pulling away to suck breath down into his lungs and Parker stole it from him every time he brought their lips back together.

“Jesus,” Parker said, breaking the kiss. He rested his forehead against Connor’s. Connor couldn’t take his eyes off the smile playing on Parker’s lips. “Where’d you learn to kiss like that?”

Connor laughed, still rocking his hips against Parker’s. “Glasgow. Heard of it?”

Parker nodded. “I’m going to have to add it to my list of places to visit.”

“No. I have other plans for tonight.”