This week’s guest for Friday Five is Leela Lou Dahlin. Thanks for visiting the blog, Leela!

What kind of books do you read for fun?
I’m an all romance kind of woman but I like all kinds. Every once in a while I’ll add a little Sci-fi in there just for kicks.

What’s the one thing you can’t live without?
My family but if you’re talking about an electronic device I’d say my iPhone

If a genie granted you three wishes, what would they be?

A genie, huh? My next story involves a genie…well…sort of. Wishes if I could have three they would be.
1. A beach house in North Carolina all furnished and paid for of course.
2. I’d wish everyone really did treat people like they wanted to be treated
3. An abundance of health, wealth and happiness
I guess I could have used the abundance of wealth to get the beach house but hindsight is 20/20. LOL

What is best writing advice you can give?
The best advice I can give is in two parts-
1. Write. I know it’s been said a million times before but if you don’t do that one part all the other parts don’t matter. Make it a priority.
2. Get into a group of other writers in real life or the internet variety—it doesn’t matter it’s just nice to have like minded people to bounce things off of. You’ll quickly figure out that authors are in a league of their own and I’ve never met such helpful people. 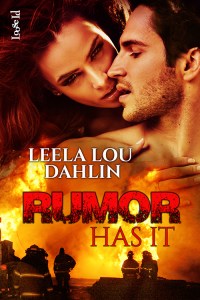 My current release is called Rumor Has It and was my NaNoWriMo 2012 so I was really happy that it was coming out at this time of year. Here’s the blurb

Raina Gibson is an event organizer who’s planned a family of her own ever since her mother passed away. The idea was to be married by age twenty-six, and have two children by thirty. She’d had everything in place, but one thing kept getting in her way: her best friend Liam Prescott. She’s attracted to his sexy confidence and intrigued by his daring spontaneity. Rumor has it this committed bachelor is phenomenal between the sheets, and since she’s never known anything but ordinary she figures that has to be the draw. So she decides there’s only one thing to do: get him into her bed and out of her system then get herself back on track.

Liam’s a Lieutenant Fire Chief who’s never forgotten what it feels like to have the most important woman in his life walk away without looking back. But there’s still something about Raina that makes him want to keep her close and protect her. So when Raina propositions him he’s torn. They’re thrown together for the Annual Fire Ball and the more he has her the more he wants.
“Out of their systems” isn’t working out as planned. So they’ll have to decide whether to keep the fire between them burning or hose down these new behaviors and go back to what’s always worked for them.